Identifying Gophers
Pocket gophers, often called gophers, Thomomys species, are burrowing rodents that get their name from the fur-lined, external cheek pouches, or pockets, they use for carrying food and nesting materials.

For the most part, gophers remain underground in their burrow system, although you’ll sometimes see them feeding at the edge of an open burrow, pushing dirt out of a burrow, or moving to a new area. Mounds of fresh soil are the best sign of a gopher’s presence. Gophers form mounds as they dig tunnels and push the loose dirt to the surface. Typically mounds are crescent or horseshoe shaped when viewed from above. The hole, which is off to one side of the mound, usually is plugged. One gopher can create several mounds in a day. In nonirrigated areas, mound building is most pronounced during spring or fall when the soil is moist and easy to dig. In irrigated areas such as lawns, flower beds, and gardens, digging conditions usually are optimal year round, and mounds can appear at any time. Gophers don’t hibernate and are active year-round, although you might not see any fresh mounding, they also can be active at all hours of the day.

Pocket gophers often invade yards and gardens, feeding on many garden crops, ornamental plants, vines, shrubs, and trees. A single gopher moving down a garden row can inflict considerable damage in a very short time. Gophers also gnaw and damage plastic water lines and lawn sprinkler systems. Their tunnels can divert and carry off irrigation water, which leads to soil erosion. Mounds on lawns interfere with mowing equipment and ruin the aesthetics of well-kept turfgrass. 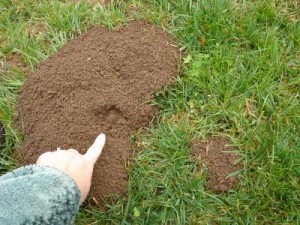